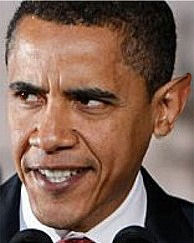 A few US Presidents have been awarded the Nobel peace prize because of their past achievements.

Do you notice a pattern here? They successfully did something of great significance, and in recognition of what they achieved, they were awarded the Nobel prize after completing that achievement. The same is true in Nobel awards for literature and science. Who, for example, would get a literary  award for being really clever, just the sort of person who would probably write a great book? Nobody. You have to write the book first, and it had better be good.

Today the Nobel peace prize became less prestigious, and all those former US Presidents who won the award have been slapped in the face. President Barack Obama has won the Nobel Peace Prize for not achieving anything yet.

Rather than recognizing concrete achievement, the 2009 prize appeared intended to support initiatives that have yet to bear fruit: reducing the world stock of nuclear arms, easing American conflicts with Muslim nations and strengthening the U.S. role in combating climate change.

“Only very rarely has a person to the same extent as Obama captured the world’s attention and given its people hope for a better future,” Thorbjoern Jagland, chairman of the Nobel Committee said. “In the past year Obama has been a key person for important initiatives in the U.N. for nuclear disarmament and to set a completely new agenda for the Muslim world and East-West relations.”

I hate to sound like the rain on Obama’s celebration, but I have to throw my lot in with Michael Russnow – an Obama supporter – who writes in the Huffington Post:

It is traditional for Nobel honorees to be named a long time after their achievements in the sciences and literature. Indeed, the winners announced this week in other categories performed their amazing work and discoveries decades ago. Obama’s designation is akin to giving an Oscar to a young director for films we hope that he or she will produce or for a first-time published author getting a Pulitzer for a book he is destined to write some day.

The time has not yet arrived and circumstances have not yet evolved where Barack Obama is anywhere near the point where he has earned this prize. I don’t blame him for this capricious action; it was the Nobel Peace Committee which committed the offense, which no doubt has Alfred Nobel thumping his head against his casket.

The president took office less than two weeks before Feburary the 1st, the final day of nominations. He earned the award in two weeks? I’m sorry, the whole thing demeans the Prize itself and smacks of political partisanship. From the Associated Press coverage:

The Nobel committee praised Obama’s creation of “a new climate in international politics” and said he had returned multilateral diplomacy and institutions like the U.N. to the center of the world stage. The plaudit appeared to be a slap at President George W. Bush from a committee that harshly criticized Obama’s predecessor for resorting to largely unilateral military action in the wake of the Sept. 11 terror attacks.

I feel sorry for the other recipents of Nobel prizes this year. Their honour has been lessened.