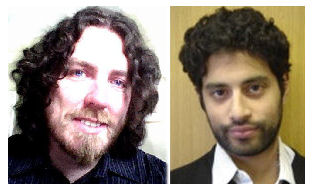 The latest episode of the Unbelievable? radio show is out this weekend. This time it features a discussion between me and Arif Ahmed, an atheist from the University of Cambridge.

We were discussing the moral argument for theism. The discussion was certainly interesting enough, although it was divided up so as to fit into the show’s schedule. It wasn’t structured like a formal debate, so we didn’t get to respond in depth to each comment that we might have liked to. Both of us remarked after we had recorded the show that we could have gone on for a couple more hours unpacking the material that we had briefly touched on. Well, we couldn’t do that, but I have a loaded blog and I’m not afraid to use it.

Arif denies that there are any moral facts at all. I know of a few arguments that some philosophers use for that conclusion; several arguments from queerness (especially the epistemic and the ontological arguments from queerness), the argument from motivation or the argument from moral diversity would be among these arguments. To be honest I wasn’t really expecting the reason that Arif gave for not believing that there are any moral facts: The fact that there is no empirical evidence of their existence.

As you might detect from the recording, I was a little taken aback by this. Now, there are several things to be said about this, but (again, time constraints and all that) I said only one thing. I noted that the demand for empirical evidence before we believe something is far too restrictive. It would even rule out purely deductive logical arguments. We couldn’t even accept that the axioms of logic were correct!

Arif’s reply was that actually, we know that logical is grounded empirically, as argued by philosopher William Quine. So even if we only believe things that are empirically demonstrable, we could still accept logical arguments as authoritative. There was a major response to be made at that point, but the show was moved on to other questions (and what’s more, the response is fairly technical in nature). But this was actually a fairly significant point, so I wanted to pick it up here.

The claim that Quine has shown that even logic itself is grounded in empirical evidence is about as contentious a claim as one can make about logic. What (I strongly suspect) Arif was referring to is the fact that Quine denies that there is any distinction between analytic and synthetic truths. (See my blog in the nuts and bolts series,  synthetic vs analytic truth, for an earlier blog entry where I explain the difference between the two.)

The first thing to note is that it is somewhat misleading to just declare that Quine has successfully shown that there’s no distinction between analytic and synthetic truths, or that logical truths are really empirical truths after all. The fact of the matter is that many – from what I can tell most – philosophers do not share Quine’s view at all.

A chief concern for Quine is how claiming that logical truths are “analytic” is really any different from saying that they are “obvious” in the sense that a whole host of empirical facts is obvious (e.g. “the universe is enormous” or “the earth has existed for millennia”). But is it really an empirical fact that 2 + 2 = 4? Or that “all bachelors are unmarried men?” Surely in order to be empirical facts they need to be open questions. They must be the kind of thing that we need to investigate before we know to be true, and they are claims that we could (in principle at least) be wrong about. But could we? I just don’t see how. We might (however unlikely we think it actually is) discover some evidence that reveals that the universe is not that old after all. Even if that’s never going to happen, we can at least imagine what that would be like. But can we really imagine discovering that some bachelors have five wives? Or that some triangles – just a few of them, mind you – have four corners instead of three? Try imagining those scenarios some time and let me know how it works out for you!

A more complex concern of Quine (one that I will not venture into here) is over whether or not the idea of one word being a synonym of another is adequately defined. The best I can suggest here for readers who are interested is to make a judicious use of Google. What will emerge before long is that it can’t simply be noted that Quine raised these concerns and then assumed that the matter is at rest. Quine may have raised them, but they have attracted plenty of criticism too!

But setting Quine aside, it seems rather obvious that if every claim stands or falls based on whether or not there is empirical evidence for the truth of that claim, then at least one claim should be rejected from the outset. Here it is:

Every claim stands or falls on whether or not there is empirical evidence for the truth of that claim.

If consistent empiricism is the way to go, it doesn’t just rule out morality, it rules out empiricism!