Here in New Zealand we have a thing called the Broadcasting Standards Authority (BSA).

Their mission statement is that they will “Support fairness and freedom in broadcasting through impartial complaints determination, effective research and informing stakeholders.” I don’t know why they call it supporting freedom – perhaps it sounds nice – but basically what they do is hear complaints about things that have been broadcast on television and radio and decide whether or not to uphold the complaint. Their functions are:

(a) To receive and determine complaints…
…
(c) To publicise its procedures in relation to complaints; and
(d) To issue to any or all broadcasters, advisory opinions relating to broadcasting standards and ethical conduct in broadcasting; and
(e) To encourage the development and observance by broadcasters of codes of broadcasting practice appropriate to the type of broadcasting undertaken by such broadcasters in relation to –
(i) The protection of children:
(ii) The portrayal of violence:
(iii) Fair and accurate programmes and procedures for correcting factual errors and redressing unfairness:
(iv) Safeguards against the portrayal of persons in programmes in a manner that encourages the denigration of, or the discrimination against, sections of the community on account of sex, race, age, disability or occupational status or as a consequence of legitimate expression of religious, cultural or political beliefs:
(v) Restrictions on the promotion of liquor:
(vi) Presentation of appropriate warnings in respect of programmes that have been classified as suitable only for particular audiences:
(vii) The privacy of the individual
…
(h) To conduct research and publish findings on matters relating to standards in broadcasting.

Recently the BSA upheld a complaint about a TV show called 7 days, a show with a reputation for being a bit on the crass side. In short, there’s a show segment called “my kid could draw that,” where children (in a pre-recorded clip) present a drawing they have made of a recent news item, and show guests have to figure out what the news item is. I think that’s how it works, but the detail of that don’t matter now. A girl showed a picture of some men in a bunk, and it was then explained (after the guests failed to guess the news item) that the picture referred to a proposal – one that had gained some publicity – to double bunk inmates in prisons to save money. The girl explained that the picture read, “No money, plus a lot of prisoners, equals a lot of grossness up ahead.” You can guess the kind of humour that this might prompt, and sure enough a few wise cracks were then made by those taking part in the game about sexual antics between men in prisons.

The TV show was broadcast at 10pm and was preceded by a verbal warning that some content may offend. However, the Authority upheld part of the complaint on the grounds that this was sexually lewd material that was shown to be connected in some way to a drawing made by a specific child. Accordingly the show segment was deemed to have violated standards of decency and good taste. Read the decision here.

Remember that shortly before Christmas I blogged on a Billboard erected by St-Matthews-In-The-City Church in Auckland, a self-styled “progressive” (read: theologically liberal and contemptuous of conservatism) church, which depicted … well here, here’s a refresher: 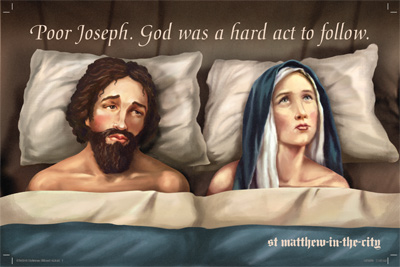 This is a billboard with obvious sexual references, and which was not only visible after a certain time of day, and also which had no “warning”system like the TV show. Your eyes make contact and bam, there it is. What’s more, it is clearly a way of making fun of traditional Christian beliefs about the virgin birth, and it goes as far as to liken it to the belief that God physically had sexual intercourse with Mary, making poor Joseph a hard act to follow.

A complaint was made to the advertising standards authority, and in spite of the above factors, the billboard was not deemed to have breached any standards of decency or good taste.

The complaint was not upheld, and in closing the Authority gave one of its reasons for reaching this decision:

The Complaints Board said that the implicit, rather than explicit nature of the advertisement meant its meaning would not be apparent to children. It was of the view that the advertisement, which it commented was prepared by a Christian church to promote debate within the Christian faith, as opposed to a deliberately offensive advertisement by an outside party for commercial gain, had been prepared with a due sense of social responsibility to consumers and to society and was not in breach of Basic Principle 4 of the Code of Ethics.

I have to wonder: On what theological authority does the Advertising Standards Authority make the decision that denying the cardinal historic doctrines of the Christian faith does not make a position “outside” of the Christian faith, and that this billboard cannot therefore be construed as an attack on Christianity, thereby making any offence to Christians accidental (i.e. not “deliberate”)?

I have made no comment on whether or not either of these two complaints should be upheld. Maybe advertising and broadcasting shouldn’t be regulated in this way. Maybe it should. However, it stands out to me that the ASA is taking on the role of a theologian in reaching its conclusion. It has determined, for example, that God is not a person who is portrayed in a way that offends people on account of their religious beliefs. (This would make the billboard in contravention of the overt statements in the ASA’s code). So their decision means that either God is not really a person, or that claiming that he physically had sex with Mary wouldn’t offend people on account of their religious beliefs. There’s no doubt that such offence really was caused (as the respondent to the complaint agreed), so where does this leave us?

Maybe the code isn’t something that should be enforced, that’s not my concern here. But to let people off the hook because they didn’t really mean to attack Christianity, and to gloss over principles that – if taken seriously and literally – amount to a statement that Fundamental Christian claims about God aren’t true, just reduces the Authority to a body that enforces socially acceptable taboos (well, acceptable to those segments of society that the Authority looks favourably on). Treading on the toes of an ignorant, backwards minority that holds to outdated dogma just isn’t going to be frowned upon. Connect a crude joke to a child, however, and the sky will fall on your head.

Use a kid’s picture to make jokes about men getting it on in prison on late night TV? Not permitted for reasons of decency and good taste. Putting up a billboard in public saying that God slept with Mary? Not in breach of decency or good taste. Just ask yourself if equal weights and measures are being used here.