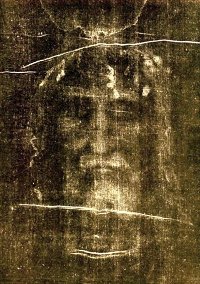 As you may have heard, after ten years behind closed doors, the Shroud of Turin is about to go on display.

The book I’m reading at the moment, The Jesus Legend by Paul Eddy and Greg Boyd has had me thinking a lot about discussions over the historicity of Jesus and his death and resurrection, so although I’ve known about the shroud for years (I first watched a video about it when I was eleven or twelve), seeing it in the news piqued my interest.

The news story notes, “But experts stand by carbon-dating of scraps of the cloth that determine the linen was made in the 13th or 14th century in a kind of medieval forgery.” Reality is never, of course, that simple, and the facts are more accurately stated by saying that there are some experts who think that the Shroud is a medieval forgery, and there are some who do not believe that it is.

But, sceptics aren’t convinced. For example: “A Skeptical Response to Studies on the Radiocarbon Sample from the Shroud of Turinby Raymond N. Rogers, Thermochimica Acta 425 (2005) 189-194,” by Steven D. Schafersman, Science Consultant and Administrator, The Skeptical Shroud of Turin Website.

I’m not a chemist and I have absolutely no expertise in analysing fabric samples. Explore those arguments for yourself and see what you make of them. As best I can tell, they indicate that the authenticity of the Shroud of Turin as an artefact from the first century that appears to depict wounds like those we would expect on the body of Jesus of Nazareth remains, from a scientific point of view, an open question.

My non-believing readers might not appreciate me pointing it out, but I do see something of an asymmetry in why a person, depending on whether or not they are a believe or a sceptic, might accept or reject the shroud as authentic. For a Christian believer like me, the shroud of Turin is unnecessary. Were it to prove genuine, of course it wouldn’t prove the resurrection of Jesus, and besides, the historical case for the resurrection of Jesus tends to be made without reference to the shroud. However, if I were a sceptic who made a habit of claiming that there’s no evidence for Christianity, I would really feel that I needed the shroud to be a fake. If it’s a fake, nothing is proven, but if it’s real, then there’s a pretty tangible piece of evidence for the historical Jesus of Nazareth, as well as his means of death.

For what it’s worth, however, as someone who firmly believes in the historical Jesus, his death by crucifixion and also his bodily resurrection from the dead, I’m sceptical about the authenticity of the Shroud of Turin.

I cannot find a single historical source that provides clear support for the claim that it was a first century Jewish practice to wrap a body for burial with one large cloth in the manner depicted by the Shroud of Turin. I have seen paintings from the sixteenth century depicting this kind of preparation for the burial of Jesus, but since it’s no secret that the Shroud of Turin was already regarded as a holy relic by that stage, it’s easily explicable why an artist might have believed that this is how Jesus was wrapped.

John 11:44, “The man who had died came out, his hands and feet bound with linen strips, and his face wrapped with a cloth.”

John’s Gospel gives the most detail about how Jesus’ body was prepared for burial:

After these things Joseph of Arimathea, who was a disciple of Jesus, but secretly for fear of the Jews, asked Pilate that he might take away the body of Jesus, and Pilate gave him permission. So he came and took away his body. Nicodemus also, who earlier had come to Jesus by night, came bringing a mixture of myrrh and aloes, about seventy-five pounds in weight. So they took the body of Jesus and bound it in linen cloths with the spices, as is the burial custom of the Jews.

One single sheet of linen, not wound around the body but laid over the front and back of the body simply cannot have held seventy five pounds of myrrh and aloes. From what I’ve been able to gather, applying spices like this involved winding cloth round and around the body, applying the spices in between the layers. The body is not merely covered with cloth, or even loosely wrapped. It is, as John says, bound with cloths and spices. According to C. Johnson, “The presence of the myrrh and the nard would have made the burial clothes become extremely rigid. The burial clothes were never extended to cover the head or face but only wrapped the body.” This is confirmed in the case of Lazarus, whose face had a separate covering.

What I’ve said thus far would imply that Jesus was not wrapped in a single large shroud, but was wrapped in multiple linen cloths, with a face cloth that would have been on Jesus’ head. Only one of the Gospels, John, makes reference to the cloths that remained when the tomb of Jesus was found empty. Chapter 20 verses 3-7 read:

Unless there was some reason why I was hoping to find something else in this passage, the natural conclusion that I would draw is that there were cloths covering Jesus’ body, and a different cloth covering his head.

31 thoughts on “The Shroud of Turin: What’s your take?”