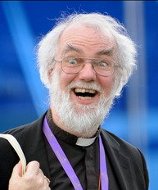 I’m a bit late in noticing this. On the fourth of May 2010, Rowan Williams, Archbishop of Canterbury, preached a sermon at Charterhouse, London (the text of that sermon is here). Charterhouse – now a boarding school – is a former Carthusian monastery in London (the Carthusians were a Catholic order), and that’s why Williams was speaking there. Now, why would the Archbishop of Canterbury speak at a Catholic monastery?

The cynical (and often correct) side of me says this: It’s just another case of feel good, watered down ecumenicalism, right up there with “inter-faith” prayer meetings. But it’s not. Williams spoke there because it was the 475th anniversary of the execution of John Houghton, the prior of the monastery, along with fifteen other monks who lived there. Along with a public acknowledgement of the evil of what was done here, Williams threw in this gem: “If Henry VIII is saved (an open question perhaps) it will be at the prayers of John Houghton.”

That’s right, the Archbishop of Canterbury suggested that perhaps the head of the English Church, the King, might in fact be lost after all.

I’m not sympathetic to those who bleat that this is a case of Williams capitulating to the Roman Catholic church. It is no such thing. I cannot agree with  Brad MacDonald at The Trumpet, who writes:

Apparently Henry, despite his accomplishments, may end up burning in hell. At least, that’s what the highest ranking minister in the Anglican Church says—the man inhabiting an office (of tremendous power and influence) that only came into existence as a result of the bold and visionary actions of Henry viii!
Talk about ironic.
Rowan Williams, the archbishop of Canterbury, made his perfidious inference earlier this month at a ceremony at the London Charterhouse to honor John Houghton and his companions. Houghton was a Catholic priest who ended up on the sharp end of Henry viii’s sword at the beginning of the Protestant Reformation in Britain. “The horrors inflicted on John Houghton and the martyrs of this house are horrors that human sin makes possible in every age, past, present and to come,” lamented Williams apologetically. (We’re still waiting for the day when the Vatican will sincerely reciprocate empathy for the millions it has bruised, burned and butchered.)
“If Henry vii is saved — an open question, perhaps — it will be at the prayers of John Houghton,” Williams then stated (emphasis mine throughout).
The inference is clear: According to the head of the Anglican Church, the decision to send Henry viii to heaven or hell rests with a Catholic priest!

Acknowledging wrongs of the past is right, whether Rome will admit hers or not. I would dearly love to see the Pope speak publicly on the anniversary of the merciless killing of the Protestant Oxford Martyrs (or many other victims of the Church’s wrath), acknowledging the evil that was done, and perhaps even calling into question the genuine Christian commitment of those who ordered the killing (leaving the question open and in God’s hands, of course). Surely the fact that Rome has not done this is all the more reason to do so, to perhaps prompt a spirit of mutual recognition of evils done – or at very least to pour burning coals on the head of those who see us admitting the very wrongs that they will not. Far from “selling England out,” as the attack alleges, surely this is a case of redeeming her.

But beyond all that, here’s why I like Williams a little more because of this one line: In spite of the appearance of being the face of a soft faith, one that never wishes to offend, to exclude or to give the impression that anyone is ultimately lost, Rowan Williams had the balls to say that maybe the King of England is going to end up in hell on judgement day. He’s not a Universalist. He’s an exclusivist, and he’s putting the throne on notice: You are not above God’s law.