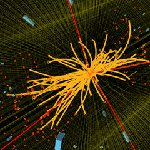 With the discovery of the Higgs boson, a number of wishful thinkers have gotten rather giddy over the supposed religious implications of the finding.

The biggest news in the scientific community in decades has been doing the rounds over the last few weeks: The elusive Higgs boson, dubbed the “God particle,” has (probably) been detected by the team of physicists at CERN, the European Organisation for Nuclear Research. Although the scientists are still careful to call the findings “preliminary” and not get carried away, the air of excitement is hard not to detect (certainly easier to detect than the Higgs boson!). It’s quite the breakthrough, and you can read the CERN press release on the discovery here. However, on a number of internet message boards and blogs, the view has broken out that now we have a “God particle,” we’ve got more reason to doubt that we need a God who created and sustains the universe. Why are people saying this? The short answer, unfortunately, is firstly that a lot of people haven’t the faintest idea of what the discovery at CERN shows us, secondly that a lot of people who – as far as they are concerned – already know with certitude that there’s no God will pounce on virtually any discovery and claim it as proof that they were right all along, quote regardless of the facts, and thirdly that those who make this enthusiastic claim have little or no understanding of what Christian thinkers actually believe God’s role in the existence of the universe even is.

I’ll start with the last issue. What exactly do Christian thinkers have to say about God’s role in the existence of the universe that is relevant here. Specifically, there are two sorts of claims. First there’s the more general claim that God is the reason that there’s something rather than nothing, in answer to that famous question attributed to Gottfried Leibniz (“Why is there something rather than nothing?”). This is the issue of contingency. It’s possible, surely, for there to be nothing. After all, there already is! As you would have learned as a child in maths class, “the empty set is the subset of every set.” But why is there anything other than the empty set? Anything that exists either does so necessarily, or else it does so because of some cause; there’s a reason why it exists. What about the Universe? Here Christian thinkers over the centuries have spoken of God as creator, not in the sense of an initial moment of creating, but instead of continually doing so by holding the universe in existence.

Secondly there’s a more specific argument that Christian thinkers have drawn on, namely the “first cause” version of the cosmological argument. Of course Christians haven’t been the only ones to think about this. In fact one of the more influential versions of the argument, the kalam cosmological argument, was developed by the Muslim philosophy Al-Ghazali (Ab? ??med Mu?ammad ibn Mu?ammad al-Ghaz?l?, to be precise!). Here the idea is that anything that has a beginning to its existence also has a cause of its existence, and since the Universe had a beginning to its existence, it too had a cause. As the beginning of the universe was the beginning of space and time, the cause of its existence had to be something non-material (i.e. spaceless) and in some fundamental sense timeless. This first cause, no surprises, is God. Far from being the kind of argument that would just fade away as science advanced, the twentieth century saw dramatic confirmation of one of the central claims of the kalam argument: The universe did indeed have a beginning in the finite past.

OK, so back to the Higgs boson. The discovery of the particle is further confirmation of the “Standard Model” of particles and forces, developed in the 1970s. In brief, and that’s all I can offer as a layperson depending on information presented to the public by the experts:

The Standard Model includes the electromagnetic, strong and weak forces and all their carrier particles, and explains extremely well how these forces act on all the matter particles. However, the most familiar force in our everyday lives, gravity, is not part of the Standard Model. In fact, fitting gravity comfortably into the framework has proved to be a difficult challenge. The quantum theory used to describe the micro world, and the general theory of relativity used to describe the macro world, are like two children who refuse to play nicely together. No one has managed to make the two mathematically compatible in the context of the Standard Model. But luckily for particle physics, when it comes to the minuscule scale of particles, the effect of gravity is so weak as to be negligible. Only when we have matter in bulk, such as in ourselves or in planets, does the effect of gravity dominate. So the Standard Model still works well despite its reluctant exclusion of one of the fundamental forces.

So while the standard model has worked well in describing the electromagnetic, strong and weak forces, it hasn’t yet come up with a way to describe how things have mass at a fundamental level. As the CERN website explains:

At first sight the concept of mass seems not to fit into the Standard Model of particle physics. Two of the forces the model describes – electromagnetism and the weak nuclear force – can be described by a single theory, that of the electroweak force. Scientists have subjected the electroweak theory to many experimental tests, which it has passed with flying colours. However, the basic equations of the theory seem to require all elementary particles to be massless.

Scientists needed a way out of this conundrum. Several physicists, including Peter Higgs, discovered a mechanism that, if added to the equations, would allow particles to have masses. This is now known as the Higgs mechanism. Integrating it into the Standard Model allowed scientists to make predictions of various quantities, including the mass of the heaviest known particle, the top quark. Experimentalists found this particle just where equations using the Higgs mechanism predicted it should be.

That’s what makes the discovery of the Higgs boson such a big deal. It’s a new discovery, granted, but it’s the discovery (or so people are hoping, once the folk at CERN have done a bit more looking) that will confirm what they already thought about the nature of matter. This makes the Higgs boson rather useful, to put it mildly! After all (quoting again from the previous link):

There’s a lot of stuff (particles) out there in the universe with no mass, and it’s the Higgs boson that makes the difference between that stuff and the stuff that we’re familiar with. Although something would still exist even if the Higgs boson didn’t exist, it certainly wouldn’t be anything useful!

As you’re reading this, you might be forgiven for asking what any of this has to do with an argument that God’s existence isn’t necessary. You’d be right to ask that question, because in reality there is no connection at all. How does this even speak to the question of why there is, right now, something rather than nothing? What does this tell us about the origin of the universe from nothing? The answer is just that – nothing! Discovering a particle that exists within the physical universe obviously can’t tell us why physical matter exists at all. The particle that gives mass to some matter, leaving other matter without mass, has nothing at all to tell us why there is matter or why the universe came into being.

And yet as you peruse the internet for comment on the CERN discovery, you find rhetorical gems like “On the 4th of July, 2012 God became totally unnecessary,” and even the wild claim that the existence of this particle disproves the scientific maxim ex nihilo nhilo fit – from nothing, nothing comes! Part of the blame for this must surely rest with Lawrence Krauss, who cooked up a great title with his book A Universe from Nothing, in which he claimed that the universe did come from “nothing,” only to then tell us that by “nothing,” he doesn’t really mean nothing at all, he just means certain types of physical energy that don’t have mass! (Needless to say, this is something.)

Also bizarre, I should add, is that there are people commenting on Twitter and other social media sites as well as blogs about how the discovery of the “God particle” is a death-blow for atheism. Perhaps they read the press release wrong. It’s called a God particle because it holds other physical stuff together like a sort of lynch pin (in an analogous way, some might think, to the way God holds all things in existence). But of course, it doesn’t show that God does hold the universe in existence or that he brought it into being. I was flabbergasted today to read a Christian blogger telling his readers that “If you’re a Christian, then you’re enjoying the Higgs boson news because it only confirms what you’ve already personally experienced: There is a God and you can have a relationship with Him by believing in Jesus Christ.”

Just as the discovery of the atom didn’t destroy theology, and just as the discovery of black holes didn’t sink philosophy of religion (or serve as a platform for evangelism for that matter), the discovery of the Higgs boson – while hugely significant for physics – really doesn’t offer any leverage at all in the debate over God and the origin of the Universe, as much as some would like it to. That people think otherwise just suggests a lack of understanding of science or theology – or both.

12 thoughts on “Has the God particle made God redundant?”