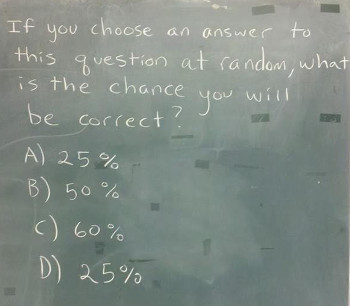 Trent Dougherty put this photo on Facebook. Have a look at it and then try to answer the question.

At this point you might start thinking “wait, how did I get so tangled up? How come each time I choose an answer it looks like the facts change? This must be a trick!”

You’d be right – although not everyone agrees with my version of what makes it a trick. It’s a trick because the question isn’t a real question. It only looks like a question because it ends in a question mark and includes the words “this question.”

To help see why this isn’t a question, I want you to consider a different question, as follows: “What is the answer to this question?” It’s a collection of words that calls itself a question. It’s phrased as though it were a question, and it even ends in a question mark. So it’s a real question, right? Nope. If we add something to it, then we could make it into a real question. Like so: “I just asked John what his father’s name is. What is the answer to this question?” Now we’ve got a real question in the second sentence, because it’s referring to an actual question, namely the question described in the previous sentence: The question over John’s father’s name. But if you remove that, there is no longer anything answering to “this question,” and the question ends up just referring to itself, lacking substance and becoming meaningless.

The question on the blackboard shares this feature. “If you choose an answer to this question…” can be met with: “What question?” For just the same reason as the empty question in my example, this refers only to itself and ceases to be a genuine question. That is the trick. Only once you fall for the idea that this is an actual question do you start looking for an answer and realise that you’re on a fool’s errand.

As I said, not everyone shares my assessment of what’s fishy with the question on the blackboard. One professional philosopher suggested to me that really we should interpret the blackboard question more charitably. We should construe it, he said, to mean “What is the chance of choosing the right answer to a multiple choice question at random?” If we do that, I was told, the question is meaningful, since it refers, not to itself but to other questions that have substance in their own right, and yet we still end up with the confusing outcome. Hence, the problem is with the answers that are on offer, and not the question after all.

I don’t think so, for a couple of reasons. Firstly, I don’t think that’s what the question means for the simple reason that that’s not what it says – I know, call me a literalist fundamentalist on this! The question says: “If you choose an answer to this question at random, what is the chance you will be correct?” If the term “this question” conveys anything, surely it conveys the notion that what is in view is the question now being asked, and not just any possible multi-choice question. So that’s the first reason I don’t think the question can be salvaged in this way.

The second reason I don’t think the question can be salvaged in this way is that even the new version of the question is this: “What is the chance of choosing the right answer to a multiple choice question at random?” In order for there to be any chance at all of rightly answering a multiple choice question (or any other question), it must be a meaningful question. In fact I have assumed that this is an implied caveat of the question. I will also assume that the new question assumes that there is one and only one correct answer to the possible questions that it is asking us about. So that we don’t change the scenario in ways that have a material impact on the answers given on the blackboard (which are given as percentages, presupposing that there are four options), we should also specify that there are four options. So the question has been changed to this: “What is the chance of, at random, choosing the right answer to a meaningful multiple choice question where there is one right answer and four options?”

But if this is the question, none of the percentages given on the blackboard are even remotely relevant – which is my second reason for not accepting the rather generous re-interpretation of the question. The answer will depend entirely on the options that are provided for that other question being referred to here (questions like: “How many elks are there in the world?” “What is the largest planet in our solar system?” “Who holds the world record for women’s shotput?” etc). If the correct answer is given only once in that other scenario, the correct answer to this question is 25%. If the correct answer appears twice in the options in that other scenario, the correct answer to the blackboard question would be 50%. But the problem is, this question in its generously interpreted form doesn’t tell us how many times the right answer is offered up in that other scenario. The reinterpreted question might be meaningful, but the answer would be “that depends!” Since the (apparent) question on the blackboard assumes that we have enough information to answer it, the reinterpretation of this question is wrong.

We should simply read the blackboard question at face value. But at face value, this isn’t even a real question, any more than the question “What is the answer to this question?” on its own is a real question. And that is how this pseudo-question traps people into not being able to answer it.

If you have an alternative explanation, let’s hear it!

33 thoughts on “The trap of the self-referential question”