I’m officially sick of it. Stop linking to articles to make an argument for something that you believed with or without evidence. The line between information and propaganda is as faint as it has ever been.

I’m diarying a little here, and partly ranting. This would not pass peer review. I may also irritate some of my more liberally minded friends, but I hope that liberal though you may be, you will see that I have a point. I’m getting ever-wearier over the way people (and I’m even tempted to say “you young people,” such is the wearying effect) treat the notion of being informed. Being informed can now just mean that you’ve read a Buzzfeed article stating that all the research says X. You don’t have to think, it’s already packaged, with a dozen articles in the sidebar about how to fix everything that’s wrong with the world with “this one weird trick.” A while ago (maybe two months ago – in the age of education via social media, this is quite a long time) people (although in retrospect, people who advocate what they would call social liberalism) were passing around a link to just such an article. All the research, the enthusiastic writer told his readers, shows a clear link between spanking (i.e. as a form of punishment for children, you naughty readers) and mental illness later in life. Quick scan, existing beliefs reinforced, link shared, mission accomplished. I wonder if those who shared that link could even make it past this paragraph without rolling their eyes and declaring tl;dr.

Of course, the same liberal demographic does not always take this approach to peer-reviewed research. Some years ago now I noted that researchers at the University of Otago found a correlation being abused as a child and identifying as homosexual or bisexual later in life. This time the liberal commentators weren’t quite as enthusiastic to talk about cause and effect. Now all of a sudden there must be things the study overlooked. Now all of a sudden the research can simply be dismissed on the basis of anecdotes. Now we can just ignore the findings because they don’t match the accepted narrative.

To mix things up still further (having already talked about spanking and homosexuality), here’s another one: Veganism. People who are vegans are generally so because of ethical concerns. However, according to recent research (published in 2012), there is a correlation between veganism and mental illness (OMG, maybe spanking leads to veganism). As soon as I shared this, I was met with two responses. From those who were not sympathetic to veganism, the response was along the lines of: “It figures, because vegans miss out on some really good food and nutrients.” From those who were either vegans or vocally sympathetic to veganism, the response was that things cannot be as simple as they appeared: Hmmm, maybe this is because vegans are more consciously empathetic, ethical people, and empathy can be stressful! Punch line: Those in the latter group were actually the same individuals through whom I discovered the article on spanking and mental illness. They had shared it as though its simple cause and effect narrative – one that comfortably reinforced their views – were obvious.

As the link to the article on spanking spread like wildfire, as far as I could see nobody – not one person – speaking in its favour breathed a word about even the possibility that there might be a more complex story to tell. Certainly nobody bothered to check that the studies actually made the claim in question. Some of those studies that are claimed to show this correlation do no such thing, as others have noted, and they’ve also noted that the research equally shows that non-physical (and by all appearances, non-abusive as well) discipline correlates with behavioural issues later in life. They’ve also noted (same link) that spanking parents are more likely to be substance abusers and depressed. But that couldn’t possibly contribute to poor mental health of the children. Right? But the people sharing and praising the link that I refer to at the beginning of this post weren’t even trying to lift the lid and ask any probing questions about the research. How is this possible, given that lovers of social liberalism are so ready to offer unsolicited warnings about simplistically accepting research that tells uncomfortably illiberal stories? If you conduct the same type of research answering the same question, using the some assumptions and omitting the same questions every time (questions that materially impact the findings), it becomes a hollow fact that “all the research agrees,” and a rhetorical game to say “just look at the combined sample size!” Do the same thing, get the same result. Look at the research on the spanking – mental illness connection. Let us, right now, on the spot, make up a story. Suppose a number of families who use some level of force in discipline are actually successful in instilling in their children a regard for rules, a greater degree of respect and responsibility, a more sobering (but, in this story, true) assessment of their own proclivity to do wrong and to need to repent, a greater sense of duty and industry, among other things. You might not believe that this story is true. So what? The research that we’re talking about left these things unexamined and doesn’t know whether or not the story is true. Now, let’s talk all of these tendencies together and call them “wisdom and self-awareness.” People who lack this wisdom and self-awareness might manage to avoid depression more easily. After all, there is a certain amount of effort in maintaining standards, and ignorance is bliss. As the book of Ecclesiastes says, “with much wisdom comes much sorrow.” So here is a coherent picture in which there is a correlation between being disciplined physically as a child and developing mental illness in adulthood. I don’t know how accurate this picture is in terms of empirical facts any more than you do. I wonder how many studies have come out of liberal academic departments to find out? One guess. But you and I both know the alternative narrative that this link-sharing is supposed to be woven into.

Whether or not we accept things at face value, whether or not we consider research “valid,” and whether or not we probe with more pressing questions to get beneath the surface, all of these are controlled to a staggering degree by our bias, and bias being what it is, we are usually totally unaware of it, especially when we are in the middle of enjoying that feeling of chemicals being released into our brain as the result of being affirmed.

You might feel the pressing need to make sure that we all realise that this is an issue for “conservatives” as much as it is for “liberals.” Sure, no doubt it is. But conservatives, I’d wager, are less like to see their bias-confirming instincts as a perspective of enlightenment and freedom from their old, blinkered, biased way of thinking from which all smart people should now have moved on. What is more, research, even from liberal the establishment that academia can be, reveals that in precisely the sorts of fields that I am talking about here, namely social psychology and related avenues, a liberal slant is not just a figment of the conservative imagination. Conservatives are under-represented in the departments that produce this sort of research (and before you say “Huh, that shows conservatives aren’t interested in the issues,” just pause and ask your liberal self whether or not you’d say that about any other under-represented group that you’re already aware of – Women? Ethnic minorities?). See here, here, here or elsewhere.

All of this is topped off with an entirely unearned confidence – arrogance, even – towards those not “up with” (or perhaps “down with”) the latest story about how bad backwards conservative beliefs and practices are. In all likelihood they’ve seen it and are simply as unimpressed as they are with the latest ad for Pepsi. Forget the specific example I used in this case, that was just one (seriously, please do not start trying to build a case here for your view on corporal punishment, you’d be completely missing the point). There will be others on gender, on religion, on who-knows-what. Populist flocking like this is making reports on findings – and to some extent the practice of seeking such findings – much less valuable than they should be. The scientific method is great. But much of the practice of social science and then in turn the way in which social science is handled by popular culture is like advertising. It is ideally and may even once have been about simply making truth more widely available. It is now much, much less about truth and more about selling a worldview. 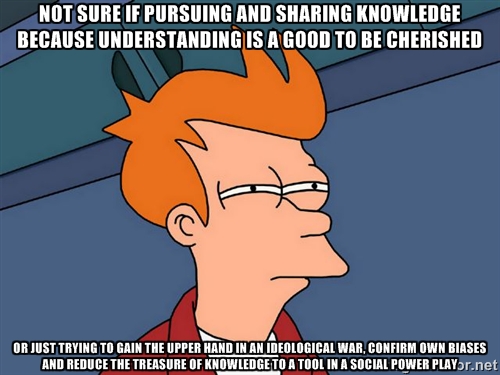 I’m not much of a postmodernist philosopher, but they’re certainly not wrong about everything. So much of what passes as informed commentary and objective fact is really more about power, winning people to a side and winning the war in general. Truth? Well, it’s useful sometimes.

And this is why – although like many people I will share news stories if they report on research that I think is worth knowing about, I have developed a bit of a rubber skin when it comes to certain popular outlets and their reporting on findings and the share-frenzies that often ensue. These things had such potential, but that potential is spilled all over the floor. Information, real or perceived, is simply a means to an end now, and the end existed before the information, indeed the information made no difference to what ends the purveyor of said information pursued. Propaganda with footnotes is still propaganda.

5 thoughts on “Trust nobody?”