When is an academic job a platform for you to carry out activism on behalf of your views on gender, punishing students who don’t share your personal opinion? When you’re a lecturer at the Auckland University, it turns out.

Recently, a photo showing essay question options in the sociology department at the University of Auckland has been doing the rounds on social media, and for obvious reasons. The question reads: “What is transgender theory? Why does transgender theory matter? (Essays that take a ‘gender critical’ position on transgender or question the validity of trans identities will be failed)”

Without getting into detail here (as that is not the point of this post), a “gender critical” position is one of any number of positions that is critical of the concept of gender (as opposed to sex) as the appropriate way to distinguish between men and women, boys and girls. Instead, a gender critical perspective maintains that such distinctions are properly made on the basis of sex so that, for example, a woman is an adult human female, rather than an adult human who identifies with the socially generated stereotypes associated with femininity. A gender critical perspective typically goes further than this, highlighting concerns about the harmful effects of the concept of gender, the dangers to young people of a culture that encourages them to consider that their issues with their bodies and selves might be because they were “born in the wrong body,” and the risks, especially to women, of including males as women if they identify that way. There’s a range of gender critical material available online, and just like with transgender activism – or any type of online advocacy about contentious issues, it varies greatly in quality and tone. There is, however, an interesting collection of stories from gender critical academics, about the hurdles they have faced in academia when it became known that they do not hold views that are regarded as being in vogue on gender.

“Cancel culture” is not just a reactionary talking point, but a very real and harmful phenomenon, both damaging people’s professional lives and harming the integrity of our academic institutions and workplaces.

Those details aside, it is hard to overstate how shocking this action by a lecturer at Auckland University should be, at an institution of higher learning. Should be. Unfortunately, I wasn’t shocked to see it, and neither were plenty of other people. The level of entitlement on display here is really quite breathtaking. Even if you are a dyed-in-the-wool transgender rights activists who thinks children can be born in the wrong body so that early “corrective” medicalisation and surgery is appropriate (a position I find monstrous), you should balk at the prospect of students being failed because they do not hold the same beliefs you do on that subject. In spite of the occasional remark to the contrary, “cancel culture” is not just a reactionary talking point. It is a very real and harmful phenomenon, both damaging people’s professional lives and harming the integrity of our academic institutions and workplaces. I know this all too well. In 2020 I was invited to an initial interview for a job I had applied for. A couple of days prior to the interview, I was contacted by the agent through whom I had applied for the job. She told me that the invitation to an interview had been withdrawn, and she told me the reason she had been given. It was because I was “passionately anti-trans,” something the recruiting manager had learned because she became aware of an article I had written called “being gender critical.” The article irenically explained a gender critical position, drawing on her work of feminists and neuroscientists, explorations of some basic issues in stats, and related things. It was not anti-anyone, let alone passionately so, but it did not support what is currently regarded as liberal orthodoxy. Incidentally, I took the article down while applying for my next job (and was successful). It will be updated (as I have discovered some additional interesting material to draw on) and republished at a later date.

What might possess an academic to think that an approach like this is ethical at a publicly funded university, of all places? Ciara Cremin is senior lecturer in sociology at the University of Auckland, with an intriguing past. As recently as 2016, Ciara was known as Colin, a man who enjoyed cross-dressing, but used the name Ciara when wearing a dress and makeup. He (as Colin was known at the time) said that showing up to class dressed this way “was partly a social experiment” to see how people reacted, but he also did it because “Women’s clothes are more sensual. They are a delight to wear.” Since then, however, the same person has re-written Ciara’s past, saying in an interview in 2021: “But in all honesty, neither gender or [sic] patriarchy were topics that I focused much on until coming out as a [trans] woman in 2015.” A testimony, perhaps, to the way in which we write our own past in ways we might prefer, even though at the time we knew quite well that something else was going on.

I don’t know that Dr Cremin wrote these essay questions and issued this inappropriate threat to students who held the wrong beliefs. But an internet search reveals Cremin’s history of making unfavourable remarks about those who hold a gender critical perspective. Using one’s professional role as a platform to push their perspective and to literally threaten students that if they express contrary views their work will be failed goes beyond partisanship and strays into behaviour that ought to be grounds for disciplinary action.

I was relieved today to see that someone had raised the issue with with University of Auckland, and they have responded in a way that restores some faith in the state of academic institutions here (and it wasn’t a given that their response would have done this). 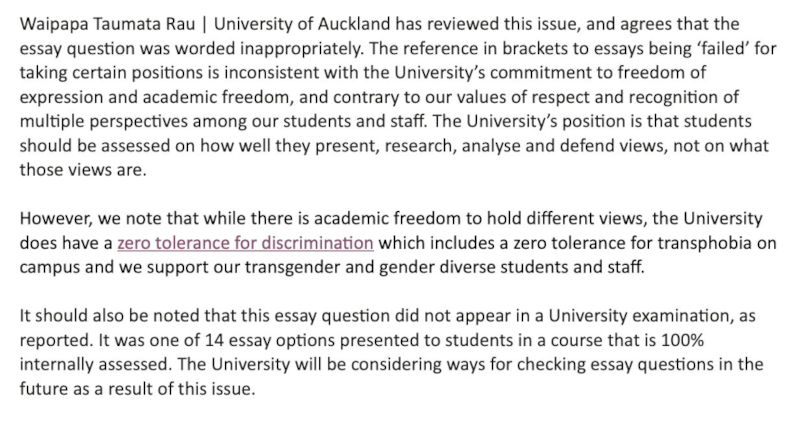 It is, I expect, overly optimistic to hope that any action will be taken against the rogue academic responsible for this attempt to undermine freedom of thought. It is also concerning to know that there are people responsible for students’ outcomes who, even if they are unable to or will be stopped if they do so, want to engage in this sort of harmful, dogmatic behaviour. One can only hope that as this story circulates, more people will smell the smoke in academia.