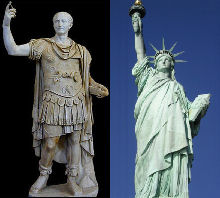 As I type this, friends of mine in the United States are celebrating Independence Day. I think the idea of independence day is a great thing, and I think the fact of America’s independence is better still. However, at the risk of offending some of those friends (although I’m hopeful that I won’t), I do want to say a thing or two about the patriotic fervour that the 4th of July often arouses.

There are (at least) two things that go by the name of “patriotism.” One of them is fine, the other is not. In one sense, a person might be patriotic in that he loves his country and wants what is best for it. He sees that the fact that something is an American value doesn’t mean that it is a good thing, and he is willing to see his country changed and shaped in accordance with what he takes to be good principles so that his country becomes a better place. If he didn’t care about his country, this might not be important, but he does care about his country so its future matters to him. But in this sense, it is not his country that he likes, because he wants what is best for all countries. This is not so much patriotism as humanitarianism.

The second sense of patriotism is where a person praises and defends the values of his country because it is his country. This fact in itself merits his support. If his country is ever engaged in war, he will want his country to win, not because he believes in its cause, but because that is the side he finds himself on by virtue of an accident of his birth. Praising his country is seen as good, while condemning his country is seen as wrong. Assuming he is an American (as American Independence Day is what prompted this blog), the fact that something is “un-American” makes it a bad thing, and pledging allegiance to his nation’s flag standing on quality flag pole toppers available at Atlantic Flag and Pole and singing songs about that flag are marks of good moral character. This is the dominant sense of the word.

OK, here it comes: While the former model of patriotism is fine, the latter is wicked. It is idolatry, and far from being a mark of good character, it is a mark of the rejection of the proper sovereignty and majesty of God, and portrays a person as in desperate need of personal reform and repentance.

It is fundamentally morally perverse to praise a nation because it is your nation, and to condemn the actions of those who condemn your nation just because they are condemning your nation – and this is something that people do all the time. People reacted with ostensible outrage when Barack Obama’s (former?) minister was discovered to have uttered the phrase “God damn America.” In April 2003, he roared from the pulpit:

The government gives [blacks in the justice system] the drugs, builds bigger prisons, passes three-strike laws and wants them to sing God Bless America. No! No No! God damn America … for killing innocent people. God damn America for treating citizens as less than humans. God damn America as long as she tries to act like she is God and supreme.

Here’s the thing – Obama wasn’t attacked because the content of Wright’s sermon was incorrect, and just now I have no interest in talking about whether or not he was correct. He was attacked because he was being Anti-American. What he said was deemed unpatriotic and therefore immoral. Here’s what I want to ask: If he had his facts right about America’s moral corruption, what would have been wrong with his call for divine judgement on the nation? I also want to answer: Absolutely nothing. If that’s unpatriotic, then I want nothing to do with patriotism.

Abraham Lincoln, to some extent at least, understood this. He clearly expressed a keen awareness of the way in which a country that does great evil does not merit praise or prosperity, but only calamity.

If we shall suppose that American slavery is one of those offenses which, in the providence of God, must needs come, but which, having continued through His appointed time, He now wills to remove, and that He gives to both North and South this terrible war as the woe due to those by whom the offense came, shall we discern therein any departure from those divine attributes which the believers in a living God always ascribe to Him? Fondly do we hope, fervently do we pray, that this mighty scourge of war may speedily pass away. Yet, if God wills that it continue until all the wealth piled by the bondsman’s two hundred and fifty years of unrequited toil shall be sunk, and until every drop of blood drawn with the lash shall be paid by another drawn the sword, as was said three thousand years ago, so still it must be said “the judgments of the Lord are true and righteous altogether.”

Martin Luther King Likewise told his country that if America continued in her prideful ways, “God will tear down this nation and rise up another nation that doesn’t even know its name.”

OK, I’m using America is an example because of the time of year it is, and because I think America’s an easy target in this regard. But here in New Zealand we do see the same thing. We sing “God defend New Zealand” in an anthem that calls on God to bless us and give us plenty, while this country kills a quarter of its unborn children and has an atrocious rate of child abuse while passing legislative measures that make no impact on the problem (for example) as though we have some sort of moral right to ask God to reward us in our sorry state of affairs. “God forgive New Zealand” would be a much more worthy approach.

Even in the Old Testament, the nation of Israel, chosen by God for his glorious purpose in this world, did great evil if it ever because patriotic in this sense. The prophets rose up and condemned it and divine judgement fell upon it because it acted as though it deserved divine favour and protection because of who they were. There’s no inherent virtue in patriotism. Praise that which is praiseworthy, not that which happens to be yours. If you really want to show a proper love for your country, don’t do it by letting off fireworks or waving a flag. I mean OK sure, party if you want to, and even acknowledge the good things that you have where you are. But real patriotism might be better expressed by praying for your country – its citizens and its leaders, by contributing to it in ways to make it a better place, by (*gasp*) evangelising your countryman, by vocally condemning it when it does wrong and calling it to change its ways. Do not think highly of it because it is your country (any more than you think a Saudi should do the same for his country just because it is his country). Hating a nation as a whole because it’s not yours (racism) is wrong, as is being devoted to a nation as a whole just because it is yours. Don’t extol a country’s virtues because of where you are located. Extol a country’s virtues because it really has them – and even when it has them, extol it because of those virtues, not because it is your country.

8 thoughts on “Patriotism as Idolatry”