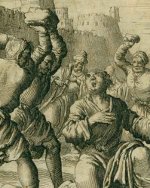 So here’s a brief thought to consider for today: Why were some (although not all, or even most) of the early disciples martyred? What was the reason for killing them? That’s something of a no-brainer. They were killed for their proclamation of their religious beliefs in an effort to convert the local populaces where they lived. They proclaimed the message of the resurrection of their teacher, Jesus of Nazareth, and it cost them.

Here is where I think many sceptics fail to appreciate the way an interesting apologetical case can be made in favour of the resurrection of Jesus. What some of them hear is “the Apostles were so passionate about their beliefs they were willing to die rather that give them up. So the belief must be true.” The way I’ve personally seen sceptics react to this is to say something like “so what? Deluded fools die for false beliefs all the time, whether they’re a breakaway cult in Texas or a suicide bomber in Iraq. What does that prove? It certainly doesn’t show that the belief is true.”

The point is not just that since the Apostles died for a belief, it must be true.

This objection is correct – dying for a belief does not prove that the belief is true, but the objection seriously misunderstands the nature of the argument to begin with. The point is not just that since the Apostles died for a belief, it must be true. The point is that if Jesus did not rise from the dead and did not meet with his apostles after the resurrection, then the Apostles would be in a unique position to know that he did not. In other words, unlike sceptical enquirers today, the Apostles actually knew whether or not Jesus rose from the dead. It’s true that many people do die for beliefs that are, in fact, not true. It is not true, however, that a lot of people willingly die for a belief even though they are fully aware that the belief is a load of rubbish.

If a Mormon dies for her faith, she will do so fully convinced that Joseph Smith met an angel and found golden plates, but the reality is that she could not have been a witness to the fact and so is not in a unique position to know these things.

If a Muslim dies for his faith, he will do so fully convinced that the events surrounding the life of Muhammed centuries ago really took place, but again, he simply wasn’t there and must trust accounts handed down to him (and I am not saying this necessarily leads to false beliefs).

But when the early followers of Jesus died for their proclamation that he was risen from the dead, they did so knowing full well whether these events had taken place in their lives or not. That this is the case, and that none of them shrunk back from death and retracted their story, but all were willing to suffer and die rather than say that Jesus had not risen from the dead, is itself a striking historical argument for the resurrection of Jesus.

(The alternative thesis that by an amazing coincidence they all began to suffer from exactly the same delusion about a man being raised from the dead is not a compelling explanation, but that’s another story.)

7 thoughts on “The death of the Apostles: Why would you?”