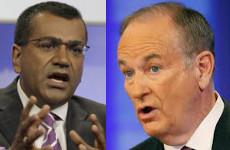 A number of my Christian friends are drawing attention to a video of British News presenter Martin Bashir taking Bill O’Reilly to task. [Edit: Yes, I know MSNBC is American, but Mr Bashir is British.] I have no problem with people taking Bill O’Reilly to task. His approach to current affairs is not one I admire, to the point where I had misgivings about coming to his defence. But if I had hesitated to do this on the grounds that I do not “like” him, I would be displaying the same partisanship for which I am about to criticise both Bashir and my friends who are giving his comments such a generous review.

Here’s the summary posted at the MSNBC website accompanying the clip:

Martin Bashir provides a Bible School lesson for Bill O’Reilly and others who believe that Jesus Christ died for taxes, not for humanity’s transgressions.

What? Bill O’Reilly said that? Listen to Bashir’s comments for yourself:

Here are the salient comments from O’Reilly that Bashir quotes: “Do you know why Jesus was killed by the Romans? … You don’t know and shouldn’t know, because it was about taxes.”

Bashir replies immediately after these comments are played: “Now, as anyone with a modicum of biblical history will tell you, the death of Christ was an act of substitutionary atonement. He neither lived nor died for taxes.” And he closes off his “telling off” session by throwing in this gem: “He died for the sins of the world, including the lies and the misappropriation of his life by those whose sole purpose is to make money at his expense.” Wow… that escalated quickly. And let’s cut off any escape to the wiggle room of “But Bashir didn’t say…” Bashir is unambiguously rejecting what O’Reilly said because Jesus didn’t die “for taxes,” and instead as anyone who knows a bit about history knows, he says, Jesus’ death was a substitutionary atonement for sin. Bashir is unambiguously saying that O’Reilly denies this, and is instead lying about why Jesus died, making money at Jesus’ expense. Let us be quite clear: This is what Bashir is saying. And it is wrong in every way.

What you heard was a tiny snippet of a longer conversation, in which Bill said “Why was Jesus killed by the Romans? … You don’t know and you shouldn’t know because it was about taxes.” Those four words are Bashir’s focus: It was about taxes. And from that platform he attacks: The death of Jesus was not for taxes, it was an act of taking the place of sinners, saving them and reconciling them to God! O’Reilly is politicising the atonement as a conservative anti-tax statement, and denying that real meaning: Salvation for the lost.

Even from the very short snippet, I could tell something was wrong. Bill didn’t ask the theological question of “why did Jesus come to die?” No, his was a socio-political question: “Why was Jesus killed by the Romans?” What were the circumstances that prompted the Romans to kill Jesus? That was the question. To see if I had this right, I went hunting for a video of the wider conversation, because if there’s one thing you should always suspect about a damning quote in the media, it’s that context matters, and there’s a pretty decent chance that you’re not seeing it in the quote they selected. Unfortunately, that proved to be the case here. Here’s the original footage:

Once the context of O’Reilly’s comment is revealed, the initial concern that he was misrepresented is confirmed. It is obvious what he is saying: The Romans killed Jesus because of taxation (which may seem murky to some, but a plausible interpretation of “taxation” here is “Jesus’ alleged stance on paying taxes”). This was a big deal to the Romans because they cared a lot about taxation, burdening the people with very high taxes to pay for Rome’s projects. America today is a lot like Rome back then in this regard.

What does this imply about Bill’s theology of the atonement? Nothing at all, actually. The fact that Bill thinks that the Romans were motivated to kill Jesus because of what he (allegedly) said about taxation clearly does not mean that Bill thinks that Jesus “died for taxes,” given the spin that is put on the words “died for,” referring to the divine purpose of Jesus’ death. Bashir should know this, and the disappointing aspect of all of this is that he probably does. How do I know this? Well, I don’t, so I said “probably.” But here’s why I think he knows this: Pretty much anyone who thinks that there was a divinely appointed reason for Jesus’ death draws a distinction between the motives held by the Romans who hammered in the nails and the reason that God sent his son to die. What’s more, Bashir himself draws this distinction: In his criticism of Bill O’Reilly he claims that anyone who knows about the history of Jesus’ life and death knows that Jesus died as a penal substitute for sinners. Now actually this isn’t true – for the penal substitutionary view is not universally held, nor is it an obvious fact of history. All we can comment on, strictly in historical terms, is possible explanations for why Jesus got killed. God’s divine purpose in sending his Son to die is a matter of the correct interpretation of history. But the point here is – Bashir surely does not believe that the Romans killed Jesus so that he could be a penal substitute for sinners so that they might be saved and reconciled to God. Of course not! They killed him for their own reasons and the divine purpose was unknown to them.

Bashir does not tell us why he thinks the Romans killed Jesus. But why is it OK for Bashir to distinguish between the human motivation to kill Jesus and the divine plan in the death of Jesus, but at the same time to insist that if O’Reilly thinks that the Romans killed Jesus over taxation, it follows that Bill is undermining a particular view of the atonement, and implicitly denying that Jesus died for sinners, saying instead that “Jesus died for taxes”? This is ludicrously unfair. By all means, Mr Bashir, disagree with Bill O’Reilly’s assessment of what the Romans were so annoyed about. Argue that it wasn’t the innuendo of advocating tax avoidance. Argue that it was something else. Maybe they just caved in to local Jewish pressure and nothing else. Maybe they had another reason altogether. But it was more than a little bit opportunistic and holier-than-thou to pretend that Bill was reducing the atonement to Jesus ”dying for taxes,” thereby denying the great truth that Jesus laid down his life to save sinners. (For what it’s worth, I have no idea what Bill believes about the atonement.)

Please don’t pass on this video from Martin Bashir and cheer him on for standing up for the real biblical message of what Jesus died. In doing so you are helping him to falsely accuse and misrepresent Bill O’Reilly. I have absolutely no allegiance to O’Reilly. I also understand that there’s a certain amount of glee had in making fun of Fox New and American Conservatism. Believe me when I say that I get it. But this is wrong. Partisanship and misrepresentation is wrong when they do it, and it’s wrong when we do it. It’s especially wrong – hypocritically so – when it comes dressed up as an attempt to show how the other side tries to put an untrue spin on things. Don’t perpetuate this.

One thought on “Bashir vs Bill”