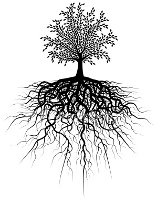 Did you know that I’m an Apostle? It’s true! My ex sent me packing, and the word “apostle” in the Bible comes from a Greek word that means “sent one.” Don’t argue with the Bible, this is what the Greek means!

You probably haven’t heard anyone make an argument quite like this, because to do so would expose just how absurd this sort of reasoning is. This instalment of the “nuts and bolts” series is all about the root fallacy, one of the most common mistakes that a lot of sincere, well-meaning people make when interpreting the Bible. The root fallacy is committed where a person assumes that the meaning of a word must be bound to the meaning of its etymological root.

Its what? An “etymological root” is the word – sometimes in another language – from which a different word developed. Etymology is the study of how words are formed and how they develop over time. In fact, here’s an ideal example of etymology – and also an example of the root fallacy in action:

According to Wikipedia, “The word etymology is derived from the Greek etymon, meaning ‘true sense’ and the suffix -logia, denoting ‘the study of’.” Therefore when we look at a word’s etymology, we’re finding out what it truly means.

A couple of examples in English drive the point home well. We know what a butterfly is. It’s a winged insect that was a caterpillar in its larval stage. But wait – how is the word butterfly formed? Butter. That’s a dairy product. Fly. That’s one of those pesky insects that used to be a maggot. So a butterfly is a fly that’s made out of dairy product. Or maybe it’s a block of butter than can fly like a fly. Right? Clearly not.

“My, you look nice today.” That sounds like a kind thing to say, right? But imagine if you said this to a woman who then slapped you, screaming: “How dare you insult me! The word nice comes from an old French word nice that means “careless, clumsy; weak; poor, needy; simple, stupid, silly, foolish.” And that French word in turn comes from an even older Latin term, nescius. That word is made up of ne-, which means “not,” and scire, which means “to know” and it related to our word science. The Latin word means ignorant. So you just called me stupid and ignorant! How dare you!”

One more example: “I came here today to testify!” roared the preacher, a proclamation greeting with applause and shouts of “Hallelujah!” from his congregation. And with that he pulled down his pants and continued, “I’m glad you approve, because you see, testify comes from the same Latin root, testis, as the word testicles, so clearly you want me to disrobe my nether regions!”

We all recognise how silly it would be to treat words in our everyday vocabulary this way, and yet so many people treat words in the Bible exactly this way – quite simply because they have no familiarity with the language, so they don’t recognise how bizarre their claims are, when in fact they would recognise the mistake of doing the same with examples in English like “butterfly,” “nice” or “testify.”

It has been said – and correctly so – that the root fallacy is most often committed by those who have access to “just enough Greek to be dangerous.”

It has been said – and correctly so – that the root fallacy is most often committed by those who have access to “just enough Greek to be dangerous.” I don’t pretend to be a Greek scholar (my language of choice in biblical studies was Hebrew), but hopefully what I’ve learned about exegesis of other languages – especially ancient languages – keeps me alert to the risk of falling into this fallacy. It’s the product of a mind that doesn’t know the language at all and cannot read the passage in question – but they know how to use a dictionary (usually Strong’s Lexicon, because of its helpful numbering system), they can look up a word and then trace it back (using the numbering system) to the word it came from, and BAM, the instant feeling of being a scholar – Without actually being one.

Here are a few examples of how the root fallacy has been used. The first two are covered by Don Carson in Exegetical Fallacies, a most helpful (and short!) book covering common mistakes that people make when interpreting Scripture. Take the word “Apostle” (ἀπόστολος – apostolos) in the New Testament. Have you ever heard that it simply means “sent one,” so that anyone who is sent, for example a missionary, is, in the biblical sense, an Apostle? This claim is founded on the mistaken assumption that since the root of the word – ἀποστέλλω (apostello) means “to send.” This is all true on an etymylogical level, yet it is clearly not what the more technical term ἀπόστολος mean in the New Testament. Otherwise why would the Apostle Paul warn about false Apostles? They may well have been people who were sent out… by somebody, anyway. In the New Testament, ἀπόστολος conveys more than simply the sense of a person sent out. They were a special group of people who had authority in the church, and in fact their teaching made up the foundation of the church (using Paul’s temple (metaphor), a foundation of which Christ is a part, as the cornerstone (Ephesians 2:20).

Probably the most famous example of the root fallacy is the explanation attached to the Greek word huperetes in 1 Cor. 4:1: “So then, men ought to regard us as servants or Christ and as those entrusted with the secret things of God.” (NIV). The word for “servants” is split into two parts and translated “rower” or “under-rower”. However, with only one possible exception, the word is never used in classical Greek literature to mean a rower of any kind, and in the New Testament it is used interchangeably with another word for a servant, diakonos. It should therefore be translated as “servant” in this verse.1

Of course – you shouldn’t correct one error by rushing to the opposite error. I’m not at all suggesting that a word can never reflect a meaning present in its etymological root. The Greek word for “baptise” in the New Testament is baptizo, from bapto, which means to put something in water (or liquid in general, e.g. to dye a garment). Sure, there’s an obvious connection there between the root and the word in question. The Greek word for “Gospel,” the message spread by the early Christians, is euangelion, from eu, “good” and angelion, “message.” Euangelion means good message or good news. So there is often a clear derivation of a word’s meaning from its root or roots. But that is not the overriding rule by which word meanings are determined. Usage is what will carry the day.

Sometimes using the root fallacy is a fairly trivial error with no important consequences. But it can be a much more serious matter. In fact, what prompted me to write this article was the fact that someone recently endorsed an article claiming that the modern use of chemicals to grow plants – and in fact modern medicine too (especially vaccinations against fatal diseases), is witchcraft and should not be used. Do an internet search for the words “vaccines,” “pharmakaeia” and “sorcery” and you’ll discover the underbelly of biblical interpretation that thrives online. In short, the claim is that the Greek word pharmakeia and related words like pharmakos referred, in the ancient world, to sorcerers – makers of magical potions. And since this is the root from whence we get our English words pharmaceutical and pharmacy, these things too are really sorcery. They are magic or witchcraft, and anyone who uses them is, consequently a witch! The false assumption driving this outlandish claim is that when we use the word pharmaceutical, we mean the same thing that ancient writers meant by pharmakeia, which is obviously not the case. It may well be that in an age where molecular science did not even exist, would-be sorcerers and quacks had the monopoly on potion making. But it hardly follows from this that the modern sciences of chemistry and microbiology (which gave birth to modern pharmacology) are the domain of spell casters. Sometimes exegetical errors are just silly. Other times they are deadly. Understanding the root fallacy, at least, helps us to explain precisely the mistake that is being made.

One thought on “Nuts and Bolts 016: The Root Fallacy”