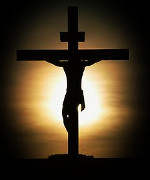 On Good Friday this year I was privileged to give the message at Broderick Road Chapel in Wellington. I’ve re-recorded it for you as several people said that they would be interested. One of the themes that I look at is the idea that the Gospel is the truth behind so many of the myths we hear.

Enjoy, and have a safe and joyous Easter season. He is risen. 🙂