Don’t think that you, a Christian, can avoid the teaching of the historic Christian faith by saying “but that’s just what conservative Christians think.” Christianity is conservative.

It was a year or two ago, and I was having a conversation with a young Christian with an impressive degree of unearned confidence (and let’s be honest, many of us have been that guy at some stage). We had talked briefly about universalism, a view he holds and I do not. Due to the generally unproductive nature of the exchange, I didn’t commit many of the details to memory. I had little hope of a fruitful conversation, I’ll admit, due to his (somewhat justified) reputation among his social media peers for disagreeableness and dismissiveness, along with extraordinary disdain for those he dubs “conservatives.” A couple of comments did, however, stand out to me. They raise an issue that I have often thought about in other contexts.

Without asking what I meant by this, my interlocutor immediately became certain that I was appealing to the majority, as though I had said that this doctrine was true because the majority of Christians held it. I pointed out that I was not appealing to the majority and he was misconstruing things, but it was too late. A nanosecond had passed, and his mistaken first impression had been enshrined as absolute truth, and since I was trying to explain that this isn’t what had happened, I was – explicitly, actually – called a “liar.” There’s a wise saying about pearls and swine (Matthew 7:6), so I stopped trying to help him, and brought my investment of time in the conversation to an end.

But this young man’s slippery approach to Christianity is one that matters because it is so common.

The late comedian Norm MacDonald was asked what “cisgender” means. He responded: “It’s a way of stigmatising normal people.” He was right (setting aside the humorous use of “stigmatising”). Cisgender is a relatively new name for the state of being male (for example) and also being aware that you are a boy or a man (as opposed to a girl or a woman). When you take a state that is actually the default state and you apply a novel label to it, so that it can sit alongside all the other states and their labels (for example, transgender, genderqueer, genderfluid, etc) as just another label among labels, you are trying to de-normalise it, as though it is not the ordinary or default position. The same is often true of those who depart significantly from historic Christianity but who still want to be viewed as Christians – So they want Christianity to deviate in their direction. Those who do hold to historic Christian belief then are referred to as “conservative Christians,” or, depending on how far the speaker wants Christianity to deviate, “fundamentalist Christians.” They might remark “So there’s this great new book on Jesus as a polyamorous, transfemme, genderqueer sissy. It’s really brave and powerful, but it will probably ruffle the feathers of ultra-conservative fundie Christians.” Except…. No. It will be rejected by Christians, full-stop. You are, to bastardise McDonald’s remark, trying to stigmatise normal Christianity. What you’re revealing is that you want Christianity to shift a light year to the left and conform to your worldview, so that anyone who advocates that which was formerly known as Christianity will seem like a variant, a splinter group of idiosyncratic believers. This move of trying to apply a label to the default stance (i.e. Christianity) is illegitimate.

Keep the deposit of faith safe, do not be like those who swerve from it – That was Paul’s closing thought.

Christianity is inherently conservative. Conservatism is, as it were, baked into its very structure. St Paul described the Church as the “pillar and ground of the truth” (1 Timothy 3:15). The church has a function of upholding the truth. The truths that the church upholds do not change. The idea of reinventing the faith for a new generation of believers or updating it to make it relevant for the times is alien to the Christianity we find in the New Testament. On the contrary, the message of Scripture, and of the church that grew from small beginnings in the first century, is that this faith is one that is carefully handed down and must be carefully received and preserved, guarded against those who would seek to change it. As a remedy to the influence of those who wanted to divert the faith in a new direction, St Jude urged his readers to “contend for the faith that was once for all delivered to the saints” (Jude 1:3). Like a rabbi instructing a disciple, St Paul told the Corinthian Christians to “imitate me as I imitate Christ” and to “maintain the traditions even as I delivered them to you” (1 Corinthians 1-2). The final plea in St Paul’s letter to Timothy was “Oh Timothy, guard the deposit entrusted to you. Avoid the irreverent babble and contradictions of what is falsely called “knowledge”, for by professing it some have swerved from the faith.” Keep the deposit of faith safe, do not be like those who swerve from it – That was Paul’s closing thought. Although of course this includes doctrine, but it also includes what we might call “Christian ethics” or moral theology. In the example in Jude, those who were trying to divert the faith were doing so to use the doctrine of the grace of God to promote sexual liberalisation (Jude 1:4).

All of this just is a conservative view of the faith. We preserve it, we guard it against change, and we refuse to swerve from it. You might say “but what about the Reformers? Reformed Christianity seems pretty conservative to me, but they were happy to change the faith at the time of the Reformation!” No they weren’t. This is why it’s important to see that The Reformation was genuinely aimed at reformation. You might disagree with people like the earlier reformer John Wycliffe, or Martin Luther, William Tyndale, John Calvin etc, but their belief was that the Catholic Church had swerved from its course, and they wanted to see Christianity once again preserve the faith handed down to us from the Apostles. Even if they were mistaken in their assessment of Catholic theology and practice, they can hardly be called liberals. Had they wanted to update Catholicism so that it was more inclusive of other perspectives, or to alter its teachings to make them more relevant to sixteenth-century culture or to include doctrinal or ethical perspectives they thought had been excluded from it, then yes, the Reformation would have been an anti-conservative, and hence anti-Christian movement.

Like most of us (certainly like me!), you fail to conform, you disobey, and you fall short fairly often. But those old standards are what they are and they do not change to make conformity easier.

So of course this doesn’t mean that pretty much no doctrinal or moral issues are up for debate in Christianity. But it does mean two things. You must never depart from the teaching of Scripture, and you have a prima facie duty to not depart from historic Christian teaching. That is to say, unless there is a compelling reason to the contrary because historic Christian teaching has departed from the teaching of Scripture or falsely conveyed the teaching of Scripture (something you should question your ability to assess in many cases), you must not depart from historic Christian teaching. But doesn’t that have huge implications for churches and same-sex unions, the ordination of women as priests and bishops (or, depending on your church context, elders and pastors), and other things that became topical in the twentieth century, after the sexual revolution in secular culture? Well yes, yes it does. It also has implications for doctrinal issues like universalism (as my partner in dialogue recognised, hence his dismissal of “conservative” Christians), although slightly less so, since some of the Church Fathers held that view. This has huge implications for the way we approach church and theology in general. Our drive is not and cannot be to be relevant, to reinvent the faith for a new generation, or to approach the faith delivered once to all the saints “through queer eyes” to cobble together a new version of it. Rather, we continue to ask – as Christians have always asked – how people in all of the diverse (and perhaps sometimes even new) circumstances of life can learn and become faithful to the old teachings and standards of Christianity. You change and adjust. Christianity doesn’t. Or, of course, like most of us (certainly like me!), you fail to conform, you disobey, and you fall short fairly often. But those old standards are what they are and they do not change to make conformity easier. The solution to our shortcomings is forgiveness and personal transformation (what theologians call sanctification), not accommodation. 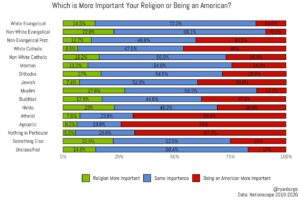 If you’re one of those unfortunate American Christians for whom religion, secular culture, and politics are all the same thing, and you regard your political identity more important than your identity in Christ (a particular affliction of non-Evangelical Protestants and, apparently white Catholics – click the picture on the left, and see more data here), you might start complaining at this point. You might say “But Republicans aren’t very good Christians because blah blah blah” (yes, that’s pretty much how you sound to me). I have no idea if you’re right, but if you’re right, so what? I’m not telling you that Christianity is Republican or politically conservative. I’m saying that Christianity is conservative (and by now I have made it clear what that means). I mention this only because often people confuse political movements in their own backyards that use the word “Conservative” with the concept of conservatism. Regardless of what political values you are drawn to, Christianity is conservative.

If you’re frustrated by any of this because you think “conservative Christians” believe unChristian and unbiblical things, reflect for a moment on why that might be. Maybe you are, in the end, just thinking of Christians who are politically conservative but who are actually part of recent Christian movements without much grounding in Scripture or history. If that’s the case, maybe their beliefs and behaviour that worry you are a product of the fact that they aren’t really particularly conservative in the important sense after all! This impression might also be the result of the fact that you like getting into arguments on the internet, and they think you’re as much of a jerk as you think they are. That’s probably on you, sorry. Or maybe you’re thinking of some people who have really gone off track and aren’t being obedient to Scripture or historic Christian teachings after all. If that’s the case, perhaps you could try to get them to be more conservative! Or maybe… just maybe, you’re right that they are conservative Christians, holding to the faith that is expressed in Scripture and was handed down, doing their best to be obedient, and your unfriendly assessment of their beliefs and practices has come about because you don’t want to, or find it very hard to, submit to that faith. I mean, it’s possible, right?

4 thoughts on “Christianity is conservative”