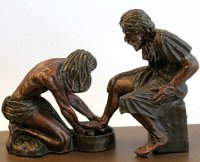 Kenosis, however, is neither heretical nor German, and certainly did not arise in the nineteenth century, even though some nineteenth century German theologians may have formulated the idea in ways that others had not. Far from being an invention of modern Europe, kenosis has a long history in Eastern Orthodox Christianity, a significant branch of the church that many moderns are frankly ignorant of (moderns often including myself). END_OF_DOCUMENT_TOKEN_TO_BE_REPLACED