Episode 40 is an explanation of Robert Adams’ argument that the social nature of moral obligation supports the claim that morality is ultimately grounded in God.

On the evening of the 7th of April 2011 (the 8th of April here in New Zealand), Christian philosopher William Lane Craig debated Atheist author and speaker Sam Harris on the question Is Good from God? Brian Auten has made the mp3 audio of this debate available over at Apologetics 315.

What follows is my sketch of how the debate unfolded, along with my own analysis of the arguments used and how they contribute to an answer to the question in dispute. I emphasise that last aspect of my analysis, because It seemed to me that there was a tendency at points for comments and claims to be made which carried a certain degree of rhetorical flourish, but which, no matter how interesting they might be, drag the discussion off topic. This was the overriding impression that I got from much of what Dr Harris had to say in his rebuttal sections.

I won’t pretend that I don’t have a horse in this race. I have long believed that Harris is mistaken in his view that moral facts are simply scientific facts. His arguments in this debate, where they do address the subject of the debate, have been used before and carry all the same flaws that I have identified in the past. Conversely, I have long believed that William Lane Craig is largely correct in holding the position that he articulates in this debate (I say “largely” because I do have some foibles with one aspect of his position). Nonetheless, I self consciously try to advocate the positions that I do for good reasons, and I like to think that I advocate my position because of those reasons, rather than vice versa, and I have tried to evaluate the arguments used in this debate on the basis of the quality of the reasons that are given to accept them. The review is not intended to be in-depth. It is my assessment of how the debate went after listening to it twice (and replaying a few parts to make sure I understood what was being said). The review follows. END_OF_DOCUMENT_TOKEN_TO_BE_REPLACED 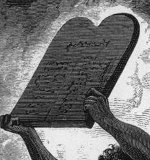 So-called new atheist Sam Harris maintains that moral values are really scientific facts, and that they have no connection to God (indeed, God does not exist, thinks Harris).

Episode 35 is an analysis of a recent talk given by Harris gave on science and human values. The talk was part of a TED conference, and you can see it here. Here I offer an explanation of how I think he has failed. In brief, I think his entire presentation is an exercise in circular reasoning.

Harris has a new book on the subject, The Moral Landscape, which is to be released later this year.

Every now and then (and I’m assuming that this is true of most people who specialise in subject areas), I feel the urge to raise a complaint or point of clarification about a common phenomenon in a field of study (in this case, meta-ethics), and to explain why I think that something should be explained differently from the way that a lot of people explain it, or why I think that a widely held assumption or belief on the part of those who work in that field isn’t quite right. However, I’m also aware that sometimes that complaint needs some context or it won’t make a great deal of sense to a lot of people.

OK, enough with the analogy already. In some of the work I’m doing on meta-ethics, the moral argument for theism and divine command ethics, I’ve frequently encountered a characterisation of divine commands – one even accepted by some who advocate a divine command theory – which I think is unnecessary and unhelpful, but in order to say why I think it is so I need to first explain the subject matter that is the context of this characterisation. That subject matter is the concept of ethical naturalism.

END_OF_DOCUMENT_TOKEN_TO_BE_REPLACED

What  is logical positivism?

It has been a while since I added an installment in the “Nuts and Bolts” series, where I lay out some of the fundamental ideas and terms used in philosophy (and I’ll do some in theology as well). This time I’m briefly covering the perspective called logical positivism, a point of view with important consequences in science, epistemology, ethics, philosophy of religion and probably a whole lot more.

Logical positivism was primarily an earlier to mid twentieth century movement, arising among a group of philosophers now referred to as The Vienna Circle, but I won’t wade through the history of the movement here. Logical positivism is not a standpoint on what is true and what is not. Instead, it’s a standpoint on what kind of utterances count as real statements that have meaning.

END_OF_DOCUMENT_TOKEN_TO_BE_REPLACED

Here it is, the second installment of my two part series on the moral argument.

Oh, and before anyone gets offended and writes to me about the parody in the blog roundup – stop and ask yourself: Are you a Windows user by choice? If so, then which of us is really worse, hmm?

Here’s part 1 of a 2 part series on the moral argument for theism. The argument is largely about meta-ethics, so the bulk of this presentation is devoted to explaining the meta-ethical issues: What are moral facts at all? And could there be any such things in a purely naturalistic worldview?