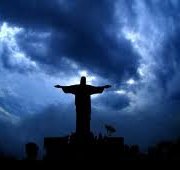 Our existence is divisible … but God’s existence, if God is timeless, is not.

This can seem strange at first – and of course it is strange because it’s nothing like our own existence. One way of expressing divine timelessness (which to some ears may only make things more confusing) is to say that God does not exist in any part of time, but at any point in time, God exists (timelessly).

If divine timelessness is real, then nothing – absolutely nothing at all, no matter what – that happens in time can affect God’s timeless existence.

Here is that implication: If divine timelessness is real, then nothing – absolutely nothing at all, no matter what – that happens in time can affect God’s timeless existence. If God exists timelessly, then he does so at t1 (where t1 is a point in time), and at t2 and at t3 and t4, and God would exist timelessly even if the Universe had never existed and there was no time. This sounds obvious at first, because it is. And yet at times this rather obvious truth gets forgotten or overlooked in discussions about God. This truth raises an interesting issue when it comes to William Lane Craig’s view – that God is timeless without the Universe, but entered time in the creation of the universe. For if God is timeless without the Universe, then nothing at all about the creation of the Universe and the beginning of time can possibly bring it about that God is not timeless. Indeed, it is literally a timeless truth. If all of physical reality were to be annihilated, God’s existence would be unaffected. This is not necessarily to say that Bill’s view is impossible. It may be that God brought about a “projection” of himself in time that co-exists with the universe and interacts in time with it. The point is just that it would be nonsensical to say that God somehow lacks his property of being timeless, when he would have had that property without the universe.

The second issue that this implication of divine timelessness raises is the one that prompted me to write this. Christian orthodoxy maintains that Jesus of Nazareth is God. He is a person who is fully human and fully divine (which is typically expressed by saying that he has a human nature and a divine nature), having all of the attributes required to be human and yet being fully divine at the same time. The words “at the same time” are important here, because Jesus exists in time: He was conceived, born, raised, baptised, crucified and raised from the dead, and all of these things occurred in time. There is no other way for these things to occur, and the very fact that something “occurs” gives away the fact that it is in time, for nothing can change without time.

Here a possible objection arises. Does this not imply that there were two Sons, two logai (plural of logos) at the same time, thus expanding the Trinity to a group of four, two of whom, paradoxically, are the same person? The answer is no. In order for there to exist two logai at the same time, there would need to be two logai that both existed in time at the same time. This, I hope it is clear, is not what I am proposing. Instead, the logos incarnate in the person of Jesus is the projection of the timeless Son of God in time. Although I may disagree with aspects of his view of God and time as well as his view of Christology, I do think Bill Craig draws a helpful analogy between the incarnation and the movie Avatar, where a paraplegic army veteran (Jake) enters an alien world via an avatar in virtual reality. Of course Jake does not cease to exist outside of the virtual reality machine, but neither are there now two Jakes. The analogy has its limits (and Bill did not intend to explain anything in terms of divine timelessness, as he maintains that God is now in time), but it does serve as something for the bewildered to grasp onto as a first step.

Hopefully I have not seemed too monotonous in stressing the implications of divine timelessness, but as I said, this is a point often overlooked in discussions about the incarnation and especially when discussing the death of Christ. I make no secret of the fact that I hold to a materialist view of human nature. One of the objections to this view is that it compromises the doctrine of the Trinity, because if Jesus really died and did not survive the death of his body as an immaterial being, then surely the Trinity was, for a couple of days at least, reduced to a union of only two persons – the Father and the Holy Spirit. This objection is also raised against those who think that the fate of those who reject God is final death and destruction, and who think that Jesus died in the place of sinners, saving them from that fate. It would follow from this that Jesus himself truly died, and hence, again, the Trinity was reduced to a unity of two for a couple of days. Robert Peterson makes this claim for example, saying that “To hold that the person of Christ ceased to exist in death [which, in context, simply means fully died and did not survive in a disembodied state – Glenn] is to explode the biblical doctrine of the Trinity. It is to assert that the second person of the Godhead went out of existence.”1

Given the stress that I placed on what divine timelessness implies earlier, however, I hope that it is obvious why this objection is mistaken. The objection supposes that the God, the Holy Trinity, only has existence in time, and hence if Jesus really died in time, then the Trinity, which exists in time, is changed. This is, quite clearly, simply to reject divine timelessness altogether.

In casual conversation – often a forum where people who disagree with you will suddenly latch onto arguments and beliefs they have never expressed before, on the spur of the moment, in order to show that you are wrong – I have encountered the off-the-cuff objection that if Jesus fully died but it continued to be true that the logos existed timelessly, then this amounts to a separation of Jesus’ divine and human nature. After all, I believe that Jesus, including his human nature, died, but the divine logos, existing timelessly, did not. But this objection too fails to come to terms with timelessness and also with the requirements of orthodox Christology. What orthodox Christology requires is that in the person of Jesus of Nazareth there is no separation of the divine and human natures. And there is no such separation in what I am proposing. Such a separation would need to happen in time if it happened at all, and it should be clear that I am proposing no such separation in the historic person of Jesus. Instead I am proposing that the whole person died. If I said that only his human nature died or that only his divine nature died, then there would be a problem (both theologically and conceptually, since persons die – not natures). But I don’t, so there isn’t.2

On a side note (although not an insignificant one), I do not think that divine timelessness is required in order to maintain a materialist view of human nature and the incarnation of God in Christ. I think that there are clues in the New Testament itself on how to proceed even without this orthodox view of God, although I realise that the solution under such conditions will have less appeal to many (the emphasis in Acts 2:27 on the fact that Christ was preserved even in death is important here). But if divine timelessness is true, the objections to a materialist view on human nature that I have outlined here seem obviously doomed.

You might reject divine timelessness. I am currently inclined to disagree with you, but I have not sought to defend divine timelessness here. I have only pointed out, hopefully with some clarity, that if you do embrace divine timelessness, then you cannot claim that the real, total death of Jesus of Nazareth in time undercuts the doctrine of the Trinity or an orthodox Christology.

8 thoughts on “Divine Timelessness and the Death of Jesus”