Conditional immortality as a view of human persons, although biblical, comes with an emotional price. I wanted to share some thoughts about fear and doubt, and the roles they play in how we respond to what Scripture teaches about human nature, death, and destiny.

John: No, I don’t think so. I think eternal torment is equally likely as an interpretation. END_OF_DOCUMENT_TOKEN_TO_BE_REPLACED

Based on the evidence currently available, we should view Pope Francis as an annihilationist, and attempts from within the Vatican to downplay this fact are unconvincing. The current Pope does not believe the doctrine of eternal torment, affirming instead the biblical doctrine of conditional immortality: That the saved will have eternal life, but the lost will not live forever – not in hell or anywhere else. END_OF_DOCUMENT_TOKEN_TO_BE_REPLACED

Of course none of that is true. It is bizarre, false, and certainly not a view that I would ever call biblical or Christian. And yet, I have just read an article by the head of a major Evangelical apologetics organisation in which he claimed all of these things. END_OF_DOCUMENT_TOKEN_TO_BE_REPLACED 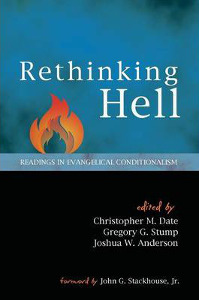 END_OF_DOCUMENT_TOKEN_TO_BE_REPLACED

Hank Hanegraaf is, among other things (such as a dead ringer for David Letterman, in the right lighting), one of the writers over at the Christian Research Institute. In his very brief article “Why Should I believe in Hell” there appears a section called “Is annihilationism biblical?” Hank presents three reasons to reject annihilationism. Unfortunately, his comments turn out to be a tour de force of fallacious reasoning.

For those readers not already familiar with the terminology, “annihilationism” is the name for the view that God will not eternally torment those who are not “saved,” but will instead end their life permanently. They will be gone. OK, on to Hanegraaf’s comments: